“Discovering America: The Publication of US Literature in Post-WWII Italy”

Thanks to the co-sponsorship of the French and Italian Department, on February 12th, 2020 Nicola Paladin gave a talk on the translation of American novels into Italian during the Fascist regime and in the post-WWII years. Dr. Paladin, a returning IFUSS fellow and now an assistant professor at  “G. D’Annunzio” University of Chieti Pescara, is currently working on a project mapping the presence of translated American texts in the Italian publishing field, applying Pierre Bourdieu’s theory of the Rules of Art. On this occasion, he presented some preliminary data on two major Italian book series: Einaudi “Coralli” and Mondadori “Medusa.” 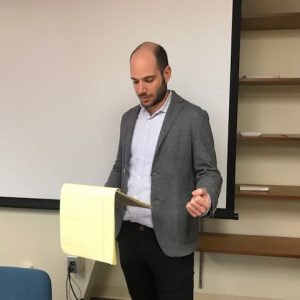 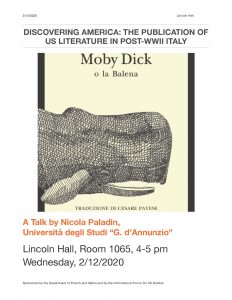 This Fall of 2019, IFUSS is happy to host Babette B. Tischleder, Professor of North American Studies and Media Studies at the University of Göttingen, Germany. Her books include The Literary Life of Things: Case Studies in American Fiction (2014) and the coedited volumes Cultures of Obsolescence: History, Materiality, and the Digital Age (2015) and An Eclectic Bestiary: Encounters in a More -than-Human World (2019). Her research has focused on the questions of materiality, obsolescence, and the agency of the nonhuman—from cherished objects and animated robots to the life of garbage and the truculence of rivers. Her work is concerned with the ways that critical and creative practices may tackle the ecological troubles and endangered futures in our multispecies world. Her current book project, Chronotopes of the Nonhuman, asks how—through narrative, poetry, and visual art—we can imagine forms of being-in-the-world that challenge established human epistemologies and take into view our entanglements with nonhuman lives.

On September 27 2019, Prof. Tischleder gave a talk at The Animal Turn Research Cluster: “Best(iary) Practice: Imagining and Inhabiting a Multispecies World (Literature, Visual Art, Theory).” She presented and discussed a selection of pictures from her latest work “An Eclectic Bestiary: Encounters in a More-than-Human World” of urban animals in three different continents. 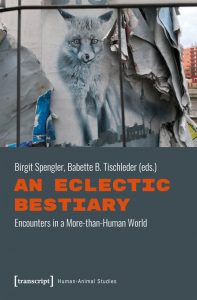 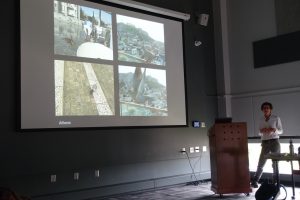 In Fall 2013, IFUSS initiated a series of WRITING WORKSHOPS, held weekly throughout most of the academic year, in which two colleagues shared work-in-progress. These workshops are generally held on Wednesday afternoons from 3 to 5 p.m. in the conference room 345 on the 3rd floor of the Armory Building, where IFUSS is currently located.  Typically two colleagues would be chosen by the IFUSS Director based on their schedule and period of residency at IFUSS. About an hour is devoted to each person’s work-in-progress, and participants often include former IFUSS Fellows participating via Skype.  Book ideas, conference papers, drafts of chapters or journal articles, research proposals, and drafts of scholarly talks have been discussed. We plan to continue these workshops in 2015-16.  Scholars participating must share something that has to do with the United States, and it must be in English since it is the only language we all have in common.  The IFUSS Director typically asks a U.S.-based colleague and a non-U.S.-based colleague to share their work at each IFUSS Writing Workshop, thereby having “presenters” (sharers) as well as “audiences”/listeners/readers/discussants who are normally located in different countries and intellectual communities.  Since IFUSS connects with colleagues in many disciplines around the world, these IFUSS Writing Workshops always include participants normally located in a range of scholarly disciplines.  Finally, it has been our custom to have each “presenter”/”sharer” circulate some written work several days before their scheduled IFUSS Writing Workshop (with the work/draft sent to the IFUSS Director and Program Coordinator, who then circulates it electronically to all expected participants).

International Anthropology of the U.S. (IAUS)

In March 2008 IFUSS Co-Founder and Consulting Director Virginia R. Dominguez launched an IFUSS initiative to locate and promote social science field-based research and scholarship on the U.S. by colleagues and advanced students based abroad.

The paucity of field-based research and scholarship of this sort by scholars outside the United States is noteworthy, especially in social/cultural/linguistic anthropology. Determining how much and what kind of work there is, locating allies in this endeavor, exploring the empirical, ethical, political, and theoretical dimensions of this phenomenon, and promoting such work are the goals of this initiative. A invited Working Group has been established Members include: Professor Keiko Ikeda (Kyoto, Japan), Professor Moshe Shokeid (Tel Aviv, Israel); Professor Jasmin Habib (Waterloo, Canada); Professor Sarah Green (Manchester, England); and Dr. Sara Le Menestrel (Paris, France).

The first IAUS working group meeting took place at IFUSS in March of 2009 to formally launch the new project. Collaborations with groups elsewhere working on related interests are being explored, and IFUSS sponsors residencies by social scientists conducting field-based research on issues relevant to U.S. Studies.

“Japan” in U.S. and the “U.S.” in Japan: the role of National Identity in Global Circuits of Consumption and Exchange

In between the “local” and the “global” lies the national realm. Despite discourses of “globalization” as either a utopian or dystopian all-encompassing process, the nation, and more importantly national identity, continue to play what we feel is an under-recognized and under-researched role in the dynamic ways that meaning is generated as products, processes, people, capital and ideas move around the globe.

To address this need for such research, this project constructs a case-study of a bi-national dialectic between the U.S. and Japan, two economic engines with extensive political power, both deeply implicated and imbricated in the dynamics of global flows. We will ask when, how, and with what effects the attribution of national origin makes a difference in how “culture in motion” travels and is received, mobilized, and transformed as it flows from one site to another and back again.

The International Forum for U.S. Studies (IFUSS) is pleased to announce the inauguration of a brand new book series titled “Global Studies of the United States”, to be sponsored by the University of Illinois Press, one of the leading academic presses in the United States.

Books in this series will present the work of scholars of the U.S. who are primarily located outside of the U.S. in their daily scholarly lives, and hence are embedded in a variety of different national and regional intellectual discourses and scholarly traditions. A special focus of the series will be the transnational study of the U.S., that is, how the movement of commodities, cultural practices, people, and ideas associated with the United States as a geopolitical entity or a cultural imaginary, circulate around the globe.

Founded in 1995 by Jane Desmond and Virginia Dominguez, IFUSS facilitates the production of new scholarship and the relationship of scholars of U.S. Studies from around the world. Our new book series is one of several initiatives to connect the work of outstanding scholars of the United States working outside the U.S. with their peers inside the U.S. and around the world.

Copyright University of Illinois Board of Trustees
Developed by ATLAS